A downloadable game for Windows and macOS

Nova Drift distills the mechanical depth of an action RPG into classic arcade space combat. Control an endlessly evolving bio-mechanical ship, face legions of strange and deadly foes, and ride the wake of a dying star across the void.

Your ship rapidly evolves as you defeat enemies, allowing you to shape its abilities and weaponry to your desires in a matter of minutes. Unlike many action-RPGs which can absorb hundreds of hours of time, Nova Drift allows you to take a ship build from inception to execution in a single game session.

Nova Drift is a living game. Frequent updates will continue to expand the depth and content of the game world. 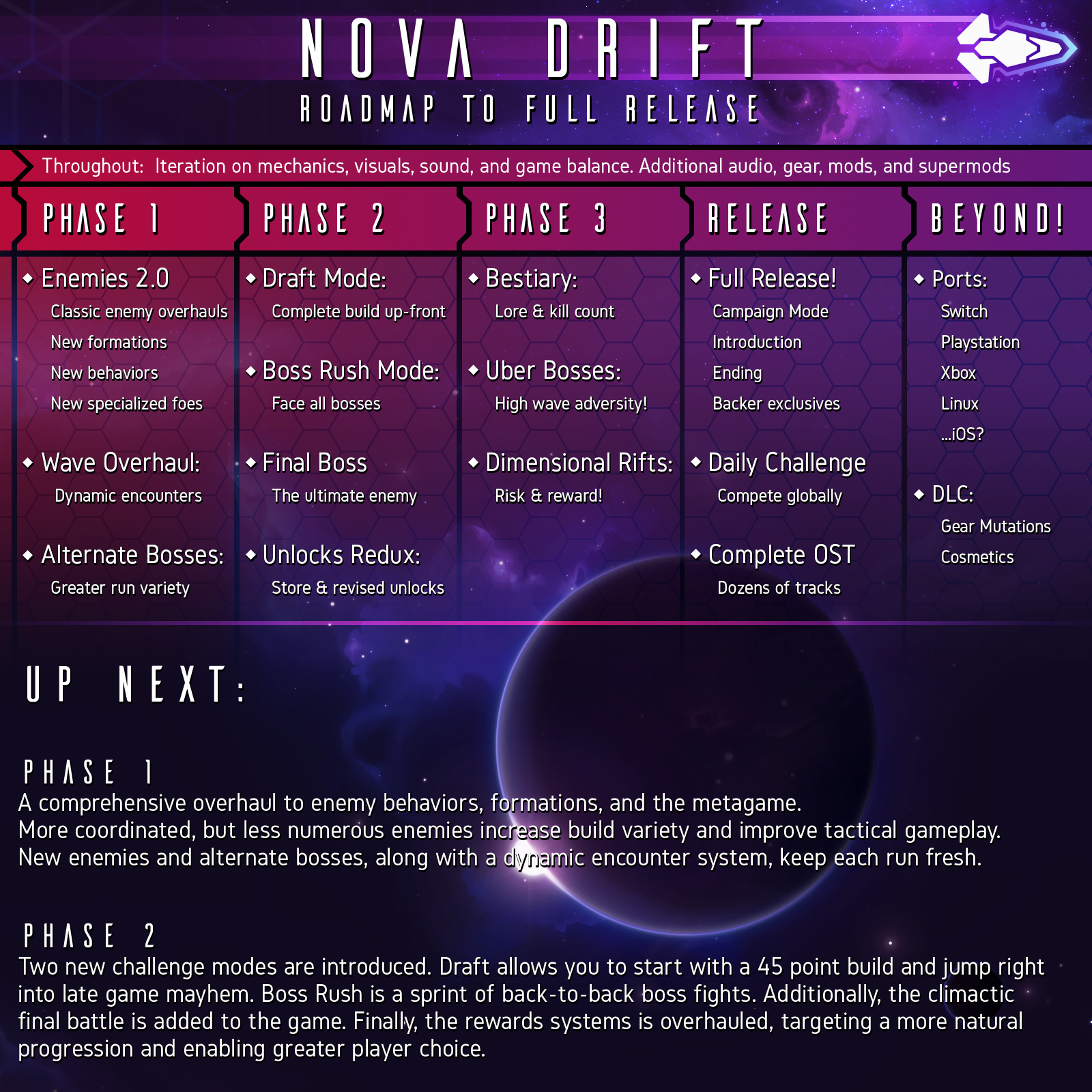 Mods & Gear can be unlocked, upgraded and combined to make unexpected and powerful combinations:

This build focuses on creating as many grenade splinters as possible using the Grenade weapon and sends them tearing toward targets using the Heat Seeking mod. The overlapping blasts from the initial explosion add up to a huge amount of damage at the epicenter, while the seeking clusters handle crowd control.

This build takes advantage of the Hullbreaker's speed and resilience to crash damage to slam directly into enemies. The fragile Amp Shield is used not for defense, but to augment Hullbreaker's strongest aspects, gaining increased speed and force. The shield will break on impact, but we can capitalize on that using the Volatile Shields mod, which detonates the shield when it goes down, blasting all nearby enemies. Flash Shielding gets it running again quickly while Emergency Systems grant a moment of damage immunity, making charge attacks safer. Finally, Celestial Lance is used to deal burning damage to everything around the ship at high velocities!

Chimeric is dedicated to creating light, streamlined games with an emphasis on deep, mechanical interaction and player agency.

We love player input and collaboration, and welcome any ideas or feedback you may have: chimericgames@gmail.com.

Join the DISCORD community and suggest features, report bugs or just hang out and talk strategy!

MAC USERS: you may have to place the game in the Applications directory for it to launch correctly.

In order to download this game you must purchase it at or above the minimum price of $14.99 USD. Your purchase comes with a Steam key. You will get access to the following files:

Man, if only I hadn't used my allowance all ready, this game looks so fun.

If I have this game on Steam, do I need to re-buy it here? Or do I just show proof or somn and get a key

Just email me and I'll send an Itch key - miles@pixeljam.com

Is there any sort of proof you want me to include? Like screenshots or something?

Thanks for the heads up!

Wish it had a demo

This games is one of the best indie games I've ever seen.

So I found a big problem. I have been playing for a while and unlocked plenty of stuff and just a few mins ago I was playing and the power went off. When it came back and opened the game again all my progress was wiped out... Help?

See if this helps (you'll need to try to remember what level your account was though):

That would help hmm. I think I was a couple of unlocks ahead of that super mod that lets you resurrect once in a weakened state, do you remember what mods would those be? And what level?

After some trial and error I found out I was at level 43, thank you!

Any idea when the GOG version will be updated? Thanks.

It was updated last week and is about to get the most recent 0.30.8 version in a few hours.

Simply put this game is fantastic. At first glance it's simple and beautiful roguelite shoot'em up. The gameplay does not disappoint, it's full of possibility and the diversity of builds you'll end up playing is amazing. Every time I lose, I can feel myself wanting to go one more. I want to try something new. I want to get further. Absolutely a ton of fun. Highly recommend this game, for $15 it has so much replayability and polish.

I did do a video review if you're so inclined to view it:

Loved it! I had some not so great comments at first about the controls, but if you keep watching, I figure it out and love it! Absolutely great and I'll continue to play!

Do you mean Itch doesn't recognize your previous purchase?  If so, email me: miles@pixeljam.com

Fuck, sorry can't say anything else, this shit is amazing...

Nova Drift is an addictively fun game. You'll sit down to play just once until you die... But then you unlock some new mods at the end of your playthrough, and you think, "Well, now I want to try that out." Then it happens again... And again. The unlock system brings a lot of replayability to the game, and keeps you coming back for more every time. The mechanics are simple to grasp but hard to master, but it never really feels punishingly impossible.

I kinda suck at the game, but the only way to get better is practice... And it's a fun game to keep playing! Never frustratingly impossible, but challenging nevertheless, and interesting to explore different combinations.

Definitely worth a purchase. The developer is also very communicative in the Discord and responsive to feedback. Come hang out with us, and share your thoughts!

I have a love/hate relationship with Nova Drift. On one hand, I like arcade-style shooters. On the other, the controls almost make me want to not recommend this game. Especially if you play on keyboard.

The gameplay is more Asteroids than the more modern style of twin-stick shooter. On paper, that's not a problem for me. Others who didn't grow up playing classic arcade games will find it a very jarring, perhaps even unenjoyable, experience.

Nova Drift does make up for its gameplay style with otherwise fun mechanics. The action turns from slow-and-methodical to a fight for survival at a moment's notice. RPG elements are added in, allowing for customization and entertaining progression.

Graphically, Nova Drift is vividly colorful without going overboard . It's not in-your-face with cyberpunk neon and more lens flare than a Michael Bay summer blockbuster. The only complaint I have is that there are enemies and bosses who are the same color of the player. I mistook an enemy as a power-up during my first game. While a similar color would suffice, the exact same color does not.

The audio is great. Nothing to complain about.

Now to the elephant in the room: the controls. The keyboard controls, to be quite frank, suck. At least on the default config. They're unintuitive and, while I could get used to them, it felt like I was playing an old DOS game rather than a modern indie game. Granted, you can change the keyboard controls in the settings, but you shouldn't have to.

The controller worked and felt so much better out-of-the-box in comparison. However, to bring up an earlier point, the Asteroids style of gameplay doesn't translate well to a modern game. A twin-stick style of controls would've worked much better. All this coming from a student of the classic arcade cabinets.

To Nova Drift's credit, the game isn't unplayable. Quite the contrary. It's a very fun arcade-style shooter that's looks great and is addictive. Despite its flaws, it's still worth checking out for a gamer looking for a new casual game.

It's a fun game with satisfying progression, but the awkward gamepad control scheme is a deal-breaker. Like another comment mentioned, a twin-stick shooter control scheme would make it much more enjoyable to play. The Asteroids-like screen wrapping feels disorienting to me, and would prefer to at least have the option to turn this off. Also, level upgrades happen too often, so the upgrade screen frequently takes you out of the game for several seconds to decide which upgrade to pick.

Overall, I feel like the game could be much better if it took inspiration from something like Geometry Wars rather than Asteroids.

Is there a list of in-game enemy names and types anywhere?

Not yet, but it's a planned feature (The Bestiary)

Reply
Anthony A. Jumelles3 years ago(+1)

Any plans on rolling out Linux support?

yes!  we recently migrated engines and this is finally supported now.

Hey, just bought this and it looks like a lot of fun! I'm having trouble with the control scheme, though. I can map the buttons for my Xbox 360 controller, but it doesn't respond to either of the sticks, so I can't aim or steer--just shoot and thrust forward.

Ah, I figured it out--I had to turn off the mouse control scheme. The ship was orienting to the mouse cursor regardless of my gamepad input.

I think I would prefer a more twin-stick-shooter style control scheme than we've got (map right stick as if it were the mouse cursor orbiting the player, map left stick to 8-directional strafe/brake), but at least this is playable!

Wow. This seems like a game I need to buy! Reminds me of a prototype I did called "Galacticum" but muuuuch more polished.

i keep checking if...

I'll be honest, I went in not expecting much and was pretty floored by how fun the whole thing was. While you might be at the mercy of rng a tiny bit at the beginning, the sheer number of upgrades you get allows you to create any build you want really quickly and it's so satisfying! I might need to turn down the effects a bit next time because that energy lattice can get crazy....

Awesome! Thanks for posting this. 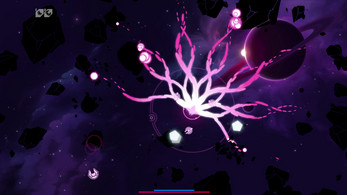 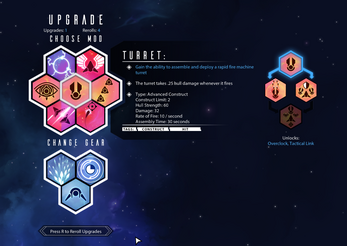 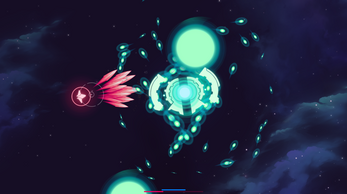 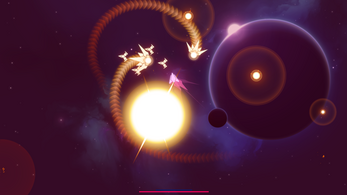 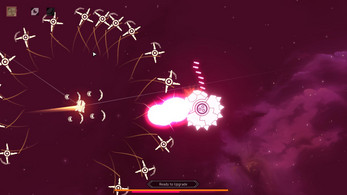 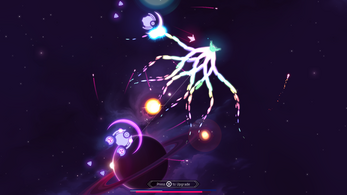 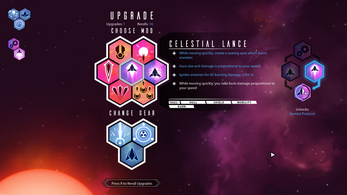 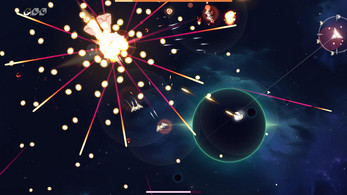 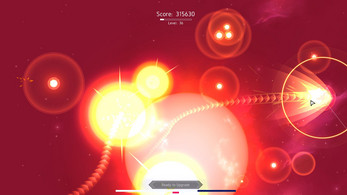 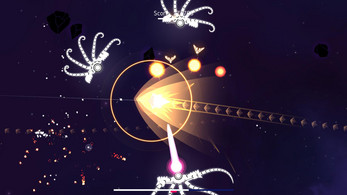